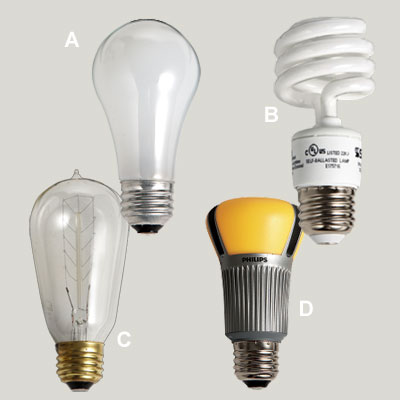 The Truth About Efficient Lighting

You Don’t Need to Stockpile Incandescents The 2007 federal energy bill didn’t outlaw incandescent technology; it just set stricter efficiency standards for certain bulbs. Most incandescents—namely, the Edison-style bulbs we’re all familiar with and that use 40 or more watts of energy—aren’t efficient enough to meet the new standards. The phaseout will be gradual; only 100-watt bulbs will vanish first, starting on January 1, 2012. Next up will be 75-watt bulbs, in 2013; then 60- and 40-watt bulbs, in 2014. And despite the phaseout, a few types of incandescents will continue to be available. Utility bulbs for things such as appliances weren’t covered in the bill. The same goes for low-wattage decorative bulbs, like the exposed-filament bulbs that have become popular recently, so feel free to invest in fixtures that use them. While the Titlows are largely eschewing incandescents, they’ve opted for exposed-filament bulbs in a few lights, such as wall fixtures on the support columns between the family room and kitchen, to bring a period look to the new space.

Bulbs that meet the new, stricter energy standards include (A) the 72-watt general-purpose halogen bulb from Sylvania, (B) the Ultra Mini CFL from Satco, and (D) the AmbientLED from Philips. Decorative bulbs, such as (C) the 40-watt 1900 Tungsten bulb from Rejuvenation, are exempt from the standards.

Read the rest at ThisOldHouse.com

To be successful, a marketing strategy needs to be carefully thought out and meticulously planned. … END_OF_DOCUMENT_TOKEN_TO_BE_REPLACED

Engaging visuals are key to standing out in busy social media feeds, and as such, it’s worth taking … END_OF_DOCUMENT_TOKEN_TO_BE_REPLACED

Here's a guest post from Mary Aspen Richardson. Despite your best efforts, from marketing to … END_OF_DOCUMENT_TOKEN_TO_BE_REPLACED

Mobile usage is now a key connector, in an increasing range of ways, and providing an optimized, … END_OF_DOCUMENT_TOKEN_TO_BE_REPLACED

Home Buyers Eager to Act Sooner Rather Than Later

Contract signings climbed 7.5% in October, and home sales for 2021 are on pace to hit a 15-year … END_OF_DOCUMENT_TOKEN_TO_BE_REPLACED

According to a recent CMO Survey, social media became even more critical to marketers during … END_OF_DOCUMENT_TOKEN_TO_BE_REPLACED